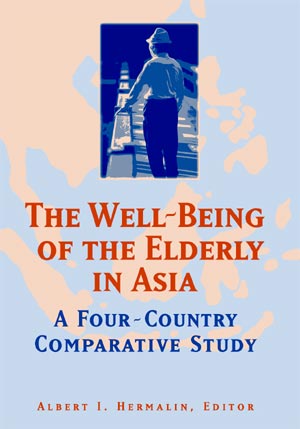 The University of Michigan Press, 2003

This monograph represents the culmination of research from 1989-2001 on the “Rapid Demographic Change and the Welfare of the Elderly” project and examines the effects of social and economic change on the aging populations of Asia.

In most of East and Southeast Asia, the past two decades have seen rapid social, economic, and demographic changes, including a shift in the population age structure whereby the older population is growing more rapidly than the younger. Indeed, the proportion of Asians aged sixty and older is projected to double in the next thirty years. Meanwhile, increases in urbanization, educational attainment, and nonagricultural employment are affecting the socioeconomic landscape.

The convergence of demographic and socioeconomic changes in Asia has led to concern for the vitality of several key cultural institutions; the strength of intergenerational relations; and the well-being of the elderly, who traditionally have relied on their families for financial, emotional, and physical support. Governments are attempting to preserve these traditions while taking into account widespread family change and new expectations for pension, health insurance, and other programs. A major question for both researchers and policymakers is whether or not the cultural norms and traditions are resilient enough in the face of these changes to provide the support needed by the growing elderly populations.

To assess the question, The Well-Being of the Elderly in Asia provides a comparative examination of the welfare of the elderly and their sources of support across four Asian societies that differ culturally and in terms of their economic development. Writing from the perspective of the demography of aging, a growing multidisciplinary field that intersects with more traditional gerontological concerns and treatments, the contributors use survey and other data collected over a ten-year period to provide a detailed collaborative investigation of the well-being of the current older population in the Philippines, Singapore, Taiwan, and Thailand on several dimensions. The book examines the context of the four countries and how policies, programs, and cultural accommodations relevant to the elderly have developed in response to recent sociodemographic changes. A common conceptual framework is used to analyze key dimensions of well-being–economic status, physical and mental health, work and leisure–and how they are affected in each society by familial, social, and formal support arrangements, as well as by age, gender, education, and urban-rural residence. Where possible, changes in these dimensions over time are traced.

The book concludes with a look at the near-term implications of the growing elderly population in Asia, anticipating how the changing characteristics, needs, and preferences of the elderly will affect and be affected by identified trends in socioeconomic conditions, cultural norms and values, social support systems, and policies.

During his long and distinguished career, Albert I. Hermalin has devoted himself to the training of demographers from all over the world, to sustained research collaborations with his former students, and to the continued expansion of the boundaries of demography. Former President of the Population Association of America and now Professor Emeritus of Sociology at the University of Michigan, he continues his lifelong research at the University of Michigan’s Population Studies Center, a division of the Institute for Social Research. He is the recipient of numerous awards, including the MERIT Award from the National Institute on Aging (which helped to fund this book), and the author of several books, including Population Health and Aging: Strengthening the Dialogue between Epidemiology and Demography (with M. Weinstein and M. A. Stoto), published in 2001.

The Well-Being of the Elderly in Asia: A Four-Country Comparative Study