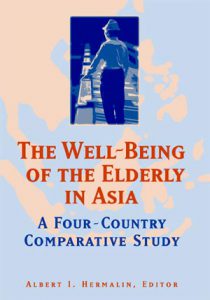 In most of East and South-East Asia, the past 10 years have been a period of rapid, social, economic and demographic change. Population aging has emerged as a new demographic trend with important implications for family arrangements and government programs. Governments are alert to the need for policies that will preserve long-standing traditions of care for the elderly within the family, while taking into account widespread family change and new expectations for pension, health insurance and other public programs.

The research agenda that flows from these trends and concerns is broad and demanding. It requires documentation of the present situation and anticipation of the future, using a large number of data collection and analytic techniques.

“Rapid Demographic Change and the Welfare of the Elderly” is a multi-year collaborative project of the Population Studies Center, University of Michigan, and several Asian population institutions. Participating countries are the Philippines, Taiwan, Thailand, and Singapore. The goal is to develop systematic data and analyses that will capture the transformations underway. Members of the project employ a broad range of data, including; censuses; other official statistics; national surveys of the elderly – both cross-sectional and longitudinal; focus groups; and case and village studies.

Elements of the research in this project are being continued and extended in The Comparative Study of Aging and Health in Asia (AHA), a multi-country collaborative study of health among older Asians in four countries: Taiwan, the Philippines, Singapore and Indonesia.